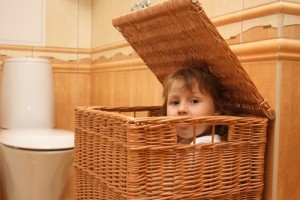 When I go into my son’s bathroom I find the usual toothpaste, toothbrush, wadded up towels, piles of clothes, and such. But, I also find the not-so-usual duct tape, pocket knife, action figures, Guinness Book of World Records, paper, pencil, and Sweet Tarts. Sweet Tarts, really? What. Is. He. Doing. In. There?

So, as any good mother would do, I set up a recon mission.

Objective: Discover what The Boy is doing in the bathroom.

Step one: Clean the bathroom. Yes, I cleaned it. I wanted it done to my specifications; after all, this is an official mission, of sorts.

Step two: Use the kitchen timer to see EXACTLY how long he is in the bathroom.

Step four: Confront said child and explain the purpose of the bathroom, and that it does not in any way involve Sweet Tarts!

Well, I now know what he does in the bathroom for 35 minutes. I must admit that I felt some sense of pride when I discovered his extended stays are book-ended with appropriate use of the bathroom and hand-washing. Score one for mom! It was the middle 30 minutes that left me at a loss for words…

My son is a Bathroom MacGyver! He spends quality, alone time inventing all sorts of “things”. And, since he is in there for so long he has Sweet Tarts to keep his sugar level within the normal range. Always the planner, that kid!

On this particular day he had created a submarine for his action figure. He had to remove all of the toilet paper from the roll – he needed the roll. He placed the action figure in the roll, and wrapped it with duct tape. He filled the sink with water and submerged the submarine to test his creation. He then had to un-wrap the roll and remove the figure to see if he stayed dry. Mission accomplished… action figure was dry.

As he is telling me of his wonderful creativity, he realizes that he did not use his Guinness Book of World Records to see if anyone else had created a submarine for an action figure while sitting on the toilet. I assured him that he is certainly the record holder in that category! And, being the good mother that I am, after awarding him a place in the record book, I yanked the Sweet Tarts out of his hands and told him that candy and toilets don’t mix – ever! Gross!