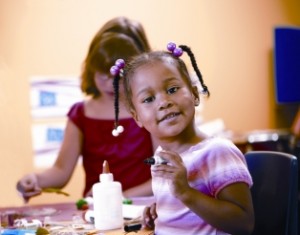 Ten days of vacation has transformed me from Joan Crawford to a hybrid of Martha Stewart and MacGyver with hair that is not as lustrous.   My two children and I spent long days together playing games, taking field trips and generally being agreeable with each other.  So much so that they commented on how much fun I am when I don’t worry about being late all the time.  My prized project for the week was an HGTV-style makeover of the basement playroom into a fantasy land (and kids’ safe haven for mommy’s cocktail hour) for school-aged children.

All the neighborhood moms would smugly roll their eyes as they described my playroom to each other.  In one corner, a complete classroom including a wall of chalkboard, maps of the world and a how-to-write-proper-cursive alphabet border.  In the other corner, a stage with dramatic drapes that move, back stage with a costume bin and props.  The kids were, predictably, floored by the unveiling.  They jumped up and down like Dr. Seuss characters and spent four solid hours exploring.  Like all first-world children, their joy peaked then dissipated by sundown.

The next day I heard raucous noise and moving of furniture upstairs.  I see the two beautiful creatures I brought into the world moving heaven and earth out of their bedrooms TO CREATE A CLASSROOM PLAY SPACE IN THE FAMILY ROOM.  Really.  Really? A slow exhale was in order but I resisted and channeled Joan Crawford right back into my life.  The hours of planning and execution of the extreme basement playroom makeover meant nothing and the idea of turning the rest of our home upside down to accomplish a classroom play was completely reasonable to them.  In a flash I realized that the proverbial box I drew around them defining play spaces so rigidly goes against their very nature.  Kids are opportunistic and look through a lens that is completely uninhibited by expectation.  They had an idea and felt free enough to try and accomplish it—even though Martha MacGyver had done it for them, it wasn’t an experience they had on their own.  The process of imagining, creating, is just as if not more fulfilling than the product.  I knew that because of how many times I ran downstairs to look at my completed project.

Tonight after the kids go to bed, I’ll visit the playroom and prepare this lesson on the chalkboard.