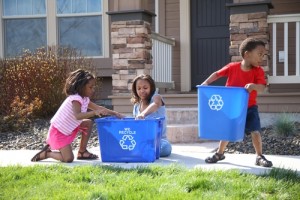 My kids are a little bit smug. They pick recyclables out of the kitchen trash and give me stomp toward the recycling container.  They take peels and scraps out of the sink and place them into bowls as my hint to take them to the compost pile. They are wicked little earth-worm diggers and they lecture me. Who was the Frankenstein that built these little earth-hugging, arugula-composting crunchies?

During the early years, I was rabid about teaching them to separate trash.  Recycling can be fun, kids.  It’s a sorting game. They’re art supplies.  I was the Smug Mommy the others talked about over wine after the play dates ended.

Now that I am back at work frazzled with the never ending demands on every mother, briefcase toting, or otherwise, I like my shortcuts.  And there is no more tempting shortcut than to dump plastic containers into the trash.  To forget about saving the food scraps and just put them in the garbage.  I’m not even embarrassed to say that paper will make its way into the trash bin.  Not embarrassed until two feisty offspring, with adorable furrowed brows and pursed lips stomp over to undo the damage my shortcut is about to inflict on our planet.  Thanks kids. My grandchildren and their grandchildren thank you too.