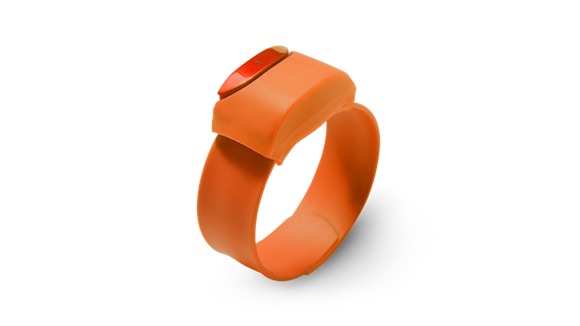 Studies show that kids with a healthy imagination are happier, often more independent, and are ready to adapt and acclimate quickly to new situations and challenges. Imagination can bring forth a childlike energy within us inspiring spontaneity and creativity. Ingenuity and innovation are often the results of nurturing the free-thinking that comes with using your imagination. At Kiddie Academy, we work to foster every child’s imagination. That’s why we couldn’t wait to try out the Moff Bands with the PBS KIDS Party app we already know and love.

Here’s what the Kiddie Academy Social Team had to say after trying the Moff Band at home with their kids:

Jen (one son, age 1): “While the package clearly said Moff was best for ages 3 and up, I thought the concept was interesting and wanted to see how Ben would react to the noises. He had a blast watching me use it and gave us a lot of belly laughs as mommy and daddy hit the piñata and played the guitar. Ben is too small to wear the band himself, but he held it and loved that his movements made different noises happen.”

Brent (one daughter, age 6, and one son, age 1): “Eliza and I had a lot of fun using the Moff band, wearing it and using her imagination to play the piñata party on the PBS KIDS Party app. My son, Greyson, is 1 year old and enjoyed watching Eliza try to hit the piñata and move around to make noises happen.”

Bridget (two sons, ages 4 and 1): “I brought home the package and the boys could not wait to open it. It took a few minutes to set up and sync the Bluetooth, but the boys loved taking turns to play the different games and then swing their arms in the air to hit the piñata. My 1 year old just wanted to do what his older brother was doing, and he was all smiles. It also gave us an opportunity to talk about what piñatas are, and how they play a role in Cinco de Mayo celebrations. It was a good teaching moment.”

Kiddie Academy Mom: “We know nurturing a child’s imagination is important, but sometimes there can be a struggle in figuring out how to do that. What activities help you inspire your child’s imagination? The Moff band helps answer that question. For parents who may not be sure what they can do to help their kids be creative or think about things in new ways, the Moff band takes the guesswork out of helping families find the power in imagination, tap into it whenever they want and make it a family activity everyone can have fun with.”

At Kiddie Academy, we know that kids learn the most when they’re having fun. The Moff band and PBS KIDS Party app provide a great opportunity for your kids to have fun and use their imagination.