How My Son Almost Missed Getting A Hulk Hand 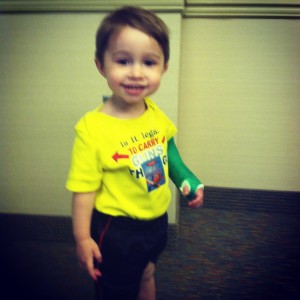 It happened…already! My 21-month old son managed to fracture his wrist. My little one was jumping up and down on our couch when he landed on his hand. He cried for a minute or so, but then he went about his day and continued to play. Naturally I didn’t think anything of it considering he landed on a soft surface.  My motherly instincts even assumed he was fine. I mean, can toddlers really fracture a bone this early in life? Aren’t those bones still growing?

It wasn’t until later that night I noticed he was favoring his other hand. When bedtime rolled around his mood worsened.

Needless to say, early the next morning I arrived at the emergency room expecting to hear the doctor tell me my son bruised some tissue. After all, even the doctor didn’t think my little guy fractured his wrist. But like any good doctor, he suggested we get that teeny tiny arm x-rayed “just in case.”  A couple hours later we returned home and my son proudly showed off his badge of honor – a cast. His hulk hand if you will.

Looking back I’m thankful the doctor made that suggestion. I was this close to not even taking my son to the hospital AT ALL! I’m a self-admitted helicopter parent but even this incident almost went unnoticed. Just chalk it up to another lesson in parenthood.

Have you been through a similar situation? Tell us how you handled it in the comments section below!