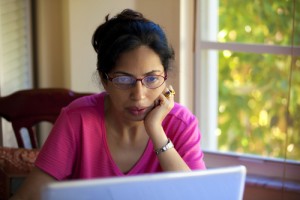 In going through some consumer research for my job in marketing, I recently read a new statistic that said moms check Facebook 4.7 every day—that is considerably more than any other demographic.  I was amazed at the frequency, I mean, who has less time than a mom?  How does she fit in the several minutes it takes to click, scroll, like, comment, like, swipe, and ignore?  Certainly I didn’t have that kind of time.

Until I started to pay attention.  That number was right on. Shockingly, this working mom of two makes time to check Facebook while coffee brews, during a commercial, at her desk in the office, as a passenger in a car, and before bed.  That adds up to 5 times in a day, and that may be an underestimate.  Facebook has become my waiting room magazine.  Except that the content is hyper-current and, for the most part, hyper-insignificant.

It’s a guilty pleasure, a victimless crime. Right?  Ashley Bernardi recently blogged about giving Facebook the boot.  She and her husband both deleted their accounts in favor of simplicity.  Don’t be alarmed, they didn’t go prehistoric.  They still use the internet and some social media, but they committed to leaving behind all of the fluff and time-wasting that they thought was being given away to Facebook rather than family.

I have to admit, the thought of deleting my account is both freeing and scary at the same time.  How did I ever know what was going on in the lives of my friends and family before this?  I used to email people individually and [gasp] attach photos of the kids.  For now, I’m going to support the research findings by staying on for now. But I am very aware of how many times I’ve already been on and if I’ve filled my 4.7 quota by noon, Facebook is cut off for this mamma.