Why You Need to Meet Dinosaur Train’s New Character

As adults, we know that all kids are different, and all kids are special. And we’re responsible for teaching the next generation how to be understanding and accepting of people who might be different in one way or another. April is Autism Awareness Month and our friends at The Jim Henson Company are introducing a new character on a brand-new episode in the Dinosaur Train series, a popular PBS series we at Kiddie Academy sponsor (maybe you’ve seen our commercial after watching your dinosaur friends!).

In this special episode of Dinosaur Train titled “Junior Conductors Academy,” Buddy and his siblings become friends with a dinosaur who knows a LOT MORE about dinosaurs than Buddy, but has some trouble making friends. Like all dinosaurs, their new friend Dennis Deinocheirus has his own dinosaur features. And, like all of us, he has strengths in some areas and challenges in others. 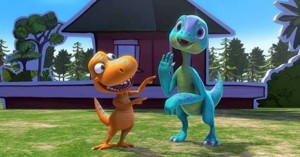 It can be difficult to start a conversation about children with disabilities. Meeting Dennis might help children be more understanding of ways the character is just like all the other Dinosaurs in many ways, while sharing his differences in ways that kids can understand.

PBS stations across the country are hosting screenings and events for this special episode in New York, Utah, Florida, Missouri, Nebraska, Indiana, Georgia and Iowa! Follow this link to learn more information about these special screenings.

Join us for the special episode today, April 6th to meet the newest member of the Dinosaur Train family, Dennis. Be sure to catch this and all the new Dinosaur Train episodes. Check your local PBS station listing for times here: http://www.pbs.org/parents/dinosaurtrain!

Kiddie Academy is a proud sponsor of Dinosaur Train on PBS.